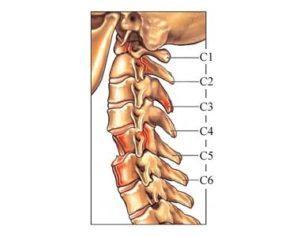 Cervical fractures usually result from high-energy trauma, such as automobile crashes or falls. Athletes are also at risk. A cervical fracture can occur if:

Treatment will depend on which of the seven cervical vertebrae are damaged and the kind of fracture sustained. A minor compression fracture can be treated with a cervical brace worn for 6 to 8 weeks until the bone heals. A more complex or extensive fracture may require traction, surgery, 2 to 3 months in a rigid cast, or a combination of these treatments.